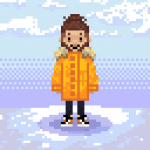 Can program and draw

Who is this ? Edit

The kind of guy that can get really motivated at any point, known for making the most illegal SW memes and shitpost. Was able to beat Star Wrecker's doubtfully clearable Extra stage.

More seriously, I'm Oelesp, I'm a french guy who draw and program stuff. I'm helping Mr Frog as one of the playtesters. I also make some SW emotes. Check the gallery to see those

I'm mainly a danmaku shoot 'em up fan, with Touhou and Len'en being my favorite series of the genre. Which is kinda why I'm making a bullet hell game.

Retrieved from "https://star-wrecker.fandom.com/wiki/User:Oelesp?oldid=741"
Community content is available under CC-BY-SA unless otherwise noted.